Exposure to various groups of SVOCs, particularly in the indoor air, is of increasing concern worldwide. These groups include PAHs, PCBs, phthalate esters, organochlorines, and many others, which are classified among the priority organic pollutants. A new method was developed and optimized for simultaneous whole air sampling using recent canister/helium diffusion technology followed by online cryogenic trapping, concentration of the SVOCs, and direct on-column injection into the GC/MS. The method was optimized using 25 SVOCs (seven of PAHs, eight of PCBs, four of phthalates, three OCs, and three of others) and tested in the analysis of 294 air samples, which were collected from the outdoor and the indoor at eight large office buildings on 21 different dates from January 2011 to August 2011. The method detection limits ranged from 0.05 ppbv for 2,4-dinitrobenzene to 2.6 ppbv for chrysene. Phthalates were the most abundant among other SVOCs, whereas fluorine and dichlorobiphenyl were the most abundant among the PAHs and PCBs, respectively. The I/O ratios of most SVOCs were < 1, indicating that the outdoor air was the main source of indoor pollutants. The method demonstrated: (1) accurate and efficient for various SVOCs determination, which allowed assessment of the factors affecting their levels in the sampling locations, and (2) the capability of reliable use of recent technology which eliminates the disadvantages of using sorbents and solvents by the current methods. 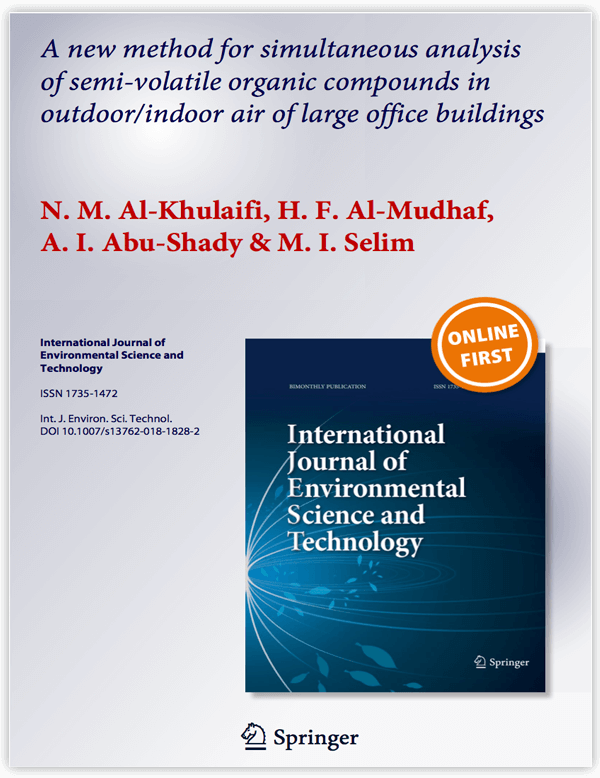