Most of what is perceived as flavors in foods are actually the aromas and odors that are being detected by our sense of smell. The human nose is far more sensitive to most flavor and odor compounds than are GCMS systems, so proper detection, identification and quantitation of these compounds requires sample enrichment. Prior to the development of SPME (Solid Phase Micro Extraction), Flavor Chemists had only loop injection, solvent extraction, and thermal desorption as the means of detecting and measuring flavor and “off-flavor” compounds. Although direct measurement of headspace aromas using Thermal Desorption provided the needed sample enrichment, adsorbents create a far too reactive environment to allow recovery of all GC compatible compounds, as many of these aroma compounds are thermally labile and decompose at the high temperatures needed to release them from the adsorbent. With the introduction of SPME, many compounds that were previously undetected using thermal desorption were recovered and identified. Unfortunately, SPME was found to be qualitative in its measurements due to issues involving carryover and inconsistent sample absorption caused by factors affecting rates of diffusion both into the headspace and then to the SPME fiber.

Entech has introduced new tools allowing Flavor and Fragrance Chemists to obtain a more complete characterization of aroma compounds than ever before.

Partial to nearly complete extraction of the volatiles and SVOCs in the sample. 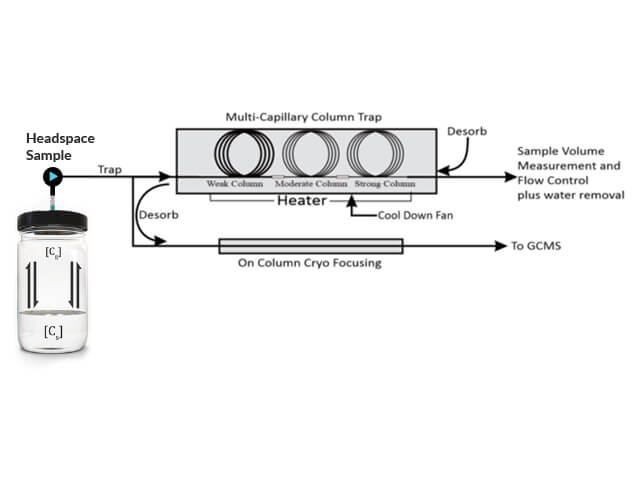 Large volume of equilibrated headspace is drawn directly onto Multi-Capillary Column Trap to create a true “picture” of an aroma profile.

Analysis of ONLY the compounds in the headspace at equilibrium.